It's been over a year since the release of RVS 3.0 and the introduction of RapiCover, our tool for on-target code coverage. The good news is our development team has been busy since September 2011 - and today we are proud to launch RVS 3.1. So what can you look forward to from this release? Here is an outline of the top 5 new features and improvements:

The main new feature for RVS 3.1 is the ability to compare two reports; this works for both RapiTime and RapiCover reports.

The majority of improvements to RVS have been under the hood to increase speed and responsiveness. The GUI is now significantly faster, with early customer previews seeing marked reductions in the time required to load a large report.

The outline view has been replaced by a Report Navigator. 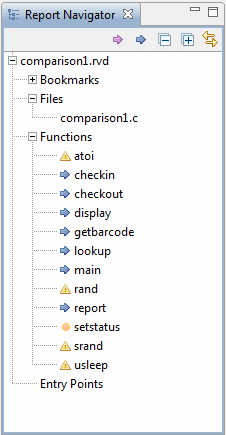 The function list is now ordered alphabetically, and you can also navigate via files and entry points too.

There is now an additional "Send Feedback (RVS)" option in the help menu. This allows you to compose a message to support at Rapita, which can optionally include an annotated screenshot (annotation is handled in the feedback wizard). You also have the option of including the rvd file you're looking at, with or without source code. The wizard will package your comments, screenshot and rvd to be either sent directly to Rapita (with optional encryption) or compressed in a zip file (also optionally encrypted). Therefore the feedback system can be used in situations where the host computer does not have internet access. The feedback system is not just for bugs; any suggestions or thoughts are welcome - that's why we called it feedback rather than bug report. If you want to comment on any part of the Report viewer - even if it's just to say you'd prefer different colours in the graphs or you don't understand some of the numbers, we're interested in hearing what you have to say.

The upgrade process no longer results in the automatic renaming of an old report or an annoying pop-up window. Instead, the upgrade happens without changing the report file on disk. The report is labelled as being 'unsaved' by a "*" in the header tab and a warning next to the tab title. You can save the upgraded report manually or you will be reminded that it's an unsaved report on closing or exit, as you would expect from any code editor. Find out more about the RVS 3.1 launch at Avionics Europe today.