I write this on the airplane home from the Ada Europe 2016 conference in sunny Pisa, Italy. It's been a good week. Here are a few highlights.

Firstly, it was good to see the key industrial sponsors like AdaCore pushing and supporting the Ada language itself. PCT, Ansys and others seem to have stepped up their Ada support too.

At Rapita we like Ada - it's a great way of writing reliable software. Many of our aerospace customers use Ada for that reason: projects using Ada work, are more cost effective and seem to come in on-time and budget. Ada is a very valuable language for now and the future, not just for aerospace; the general embedded industry could save a lot of effort by its use. We hear story after story of how the inappropriate use of C#, C, C++ has lead to big problems in medical devices, automotive and industrial automation.

Most of Rapita's software is written in Ada using GNAT Pro, so we really understand the language - this is one of the reasons we we provide the best and most complete Ada language support in RVS for coverage, timing and unit-test.

AdaCore have been instrumental in supporting Ada, maintaining the GPL and PRO compilers, books, education, academic programmes and the various initiatives including the Make with Ada competition launched this week. Do take a look at this!

The Ada Pilot initiative is also a good promotion of Ada - I finally met Jarno Puff who is the key person pushing this project forwards. The project aims to build an open source Ada flight system for drones, which people can use on their own hobby projects or in commercial situations. It promises to be a great way to get the message out. Rapita is pleased to support this initiative.

Multi-core and parallel computation in Ada was a recurring theme this week. There are various language extensions and parallel programming libraries proposed, courtesy of Tucker Taft (AdaCore) and Brad Moor (General Dynamics). They have been looking at ways to efficiently target Ada at many-core platforms for high performance computing. There were also a number of papers presented on this topic.

Of course Ada already supports multi-core processors through its language-level concurrency, yet there is more exciting work to come with fine-grained parallelism opportunities on many-cores. For example, the ability to automatically parallelize iterations of a 'for loop' to different processors.

It was fantastic to meet new industrial people at the conference this year - key companies who use Ada such as Airbus, BAE, Altran (and more) were represented and it was good to meet top engineers who really have experience of large reliable systems development. However, there were many industries that were not represented, which is a missed opportunity.

Speaking for the UK, I hope that we can encourage more UK companies to get involved through the formation of the new Ada UK organization - thanks to Dene Brown for setting this up - there are lots of opportunities for community building, collaboration and supporting a technology that we all rely on. I encourage you to join Ada UK - whether as a personal member or as a corporate body. Everyone who uses Ada should be a member  - but we need to transform this from a "charity donation" mentality to something that gives real benefit to its members: what would you like to see Ada UK do? What can Ada UK do for you? Answers via LinkedIn.

Finally, it was a pleasure to receive the prize for the best presentation for the paper "Automated Testing of SPARK Ada Contracts (AUTOSAC)" - this is a nice piece of work, based on our RapiTest Framework tool, in collaboration with Altran and the University of Oxford and I thank those who did the hard work in preparing the technical work.

So, thanks to the organizers - great job again - hope to see you in Vienna for next year's conference. 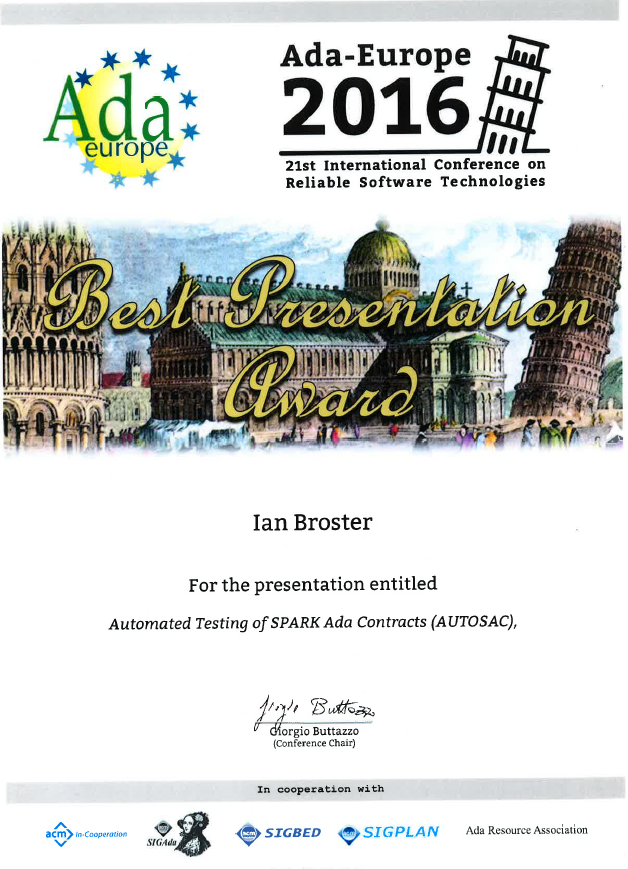