What really happened to the software on the Mars Pathfinder spacecraft?

It’s the 4th of July. Exactly sixteen years ago today the Mars Pathfinder landed to a media fanfare and began to transmit data back to Earth. Days later and the flow of information and images was interrupted by a series of total systems resets. How this problem was a) diagnosed and b) resolved still makes for a fascinating tale for software engineers.[1]

The Pathfinder's applications were scheduled by the VxWorks RTOS. Since VxWorks provides pre-emptive priority scheduling of threads, tasks were executed as threads with priorities determined by their relative urgency.

The meteorological data gathering task ran as an infrequent, low priority thread, and used the information bus synchronized with mutual exclusion locks (mutexes). Other higher priority threads took precedence when necessary, including a very high priority bus management task, which also accessed the bus with mutexes. Unfortunately in this case, a long-running communications task, having higher priority than the meteorological task, but lower than the bus management task, prevented it from running.

Soon, a watchdog timer noticed that the bus management task had not been executed for some time, concluded that something had gone wrong, and ordered a total system reset. (Engineers later confessed that system resets had occurred during pre-flight tests. They put these down to a hardware glitch and returned to focusing on the mission-critical landing software.)

To fix the problem, they turned on a boolean parameter that indicates whether priority inheritance should be performed by the mutex. The mutex in question had been initialized with the parameter off; had it been on, the priority inversion would have been prevented.

The initialization parameter for the mutex which caused the problem (and those for two others which could have caused the same problem) was stored in a global variable, whose address was in symbol tables also included in the launch software. Because VxWorks contains a C language interpreter intended to allow developers to type in C expressions and functions to be executed during system debugging, it was possible to upload a short C program to the spacecraft, which when interpreted, changed the values of these variables from FALSE to TRUE. This put an end to the system resets.

What did engineers learn?

The origins of the solution

When the keynote speaker referred to a paper which first identified the priority inversion problem and proposed the solution, something extraordinary happened - amazingly, the authors were all in the room and received a rapturous reception. The original paper was:

[1] This summary is based on a note written by Mike Jones in December 1997 following an IEEE Real-Time Systems Symposium keynote address by David Wilner, Chief Technical Officer of Wind River Systems. 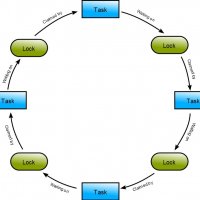